The Simeone Museum demonstrated four cars under the theme: Rally: 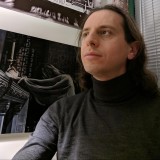